Is this marriage legal?

The subject interest stems from two relationship events in my Jones-Sexton Tree – one on England, the other in Australia – that I learned were subject to different legal perspectives. At the time, I wrote an article Two sisters one husband: Or two wives one mother-in-law

that I may in the future re-edit for publication on this Blog.

The England story concerns the family of my second great grandmother Jane Trevelion who arrived in South Australia in 1852 and married James Sexton in 1853. Jane’s father George Trevelion was a Blacksmith (and sometimes described as an Engineer) who became a shopkeeper. He died at age only 35 in 1838 leaving Ann Maria (Cook) Trevelion with 11 children under the age of 15 years. The eldest daughter Ann Maria Trevelion marries in 1843 to William Carter with her sister Emma Creed Trevelion as a witness. In 1849 Ann Maria the matriarch dies evidently with a disastrous impact on the family. In 1851 Emma Creed Trevelion is living with her sister Ann Maria and her husband William Carter along with Emma Creed’s younger brothers Joseph and William. Eleanor and Jane Trevelion are in ‘service’ and the other sister Mary is age 16 years is living in the Female Orphan Asylum, Westminster Road, Lambeth.

In England, the Marriage Act of 1835 confirmed the legality of such past marriages but the bill was amended to make such future marriages illegal. There was considerable debate about the issue for the balance of the century. In Australia, each of the colonies in the 1870s had passed a Deceased Wife’s Sister Marriage Act whereby such marriages were legal. Arguably, the Australian Colonies moved to distance themselves from England on this social issue. Such marriages remained illegal in England until the Deceased Wife’s Sister Marriage Act passed in 1907 and the Deceased Brother’s Widow Marriage Act of 1921. The Gilbert and Sullivan opera “Iolanthe” refers to this social debate of the time:

Every bill and every measure
That may gratify his pleasure,
Though your fury it arouses,
Shall be passed by both your Houses!
You shall sit, if he sees reason,
Through the grouse and salmon season;
He shall end the cherished rights
You enjoy on Friday nights:
He shall prick that annual blister
Marriage with deceased wife’s sister:

I had first come across Deceased Sister’s Wife issue in Queensland where my great grand aunt Frances Bridget Carroll married a wolfram miner named Frederick Goldup 30 December 1903. Frances died in childbirth in Cooktown 25 December 1904 age only 22 years. Frederick and his brothers were subsequently quite successful in their mining ventures without ever becoming tycoons and he was obviously able to finance a quite ornate headstone. The headstone inscription reads: 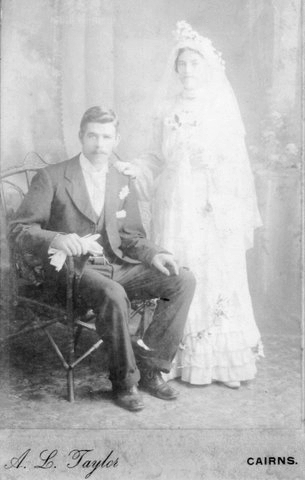 Then in 1907, Frederick marries Frances Bridget’s younger sister Margaret Agnes Carroll and together they have four children. Frederick continues as miner at Bamford in the Chillagoe region but by 1922 he was in the Westwood Sanatorium, near Rockhampton, which was established to treat people afflicted with Miners’ Phthisis, and he dies in 1923 age 43 years. Margaret raises her four children then age 7-15 years in Bowen, Queensland, where she lives until her death in 1951.

At the time, life is tough and in remote Australia the opportunities for social interaction are so limited I thought little of this marriage to the deceased wife’s sister. It was only later that I began to learn of the background history and that the concept had been a social controversy.

Furthermore, there is an interesting twist on this marriage situation to be found in my wife Lorelei’s Chin-Chee Quee Family Tree. James Chee Quee marries Moo Kim Foong in Darwin in 1909 and their first child Alberta is born that year. Probably in 1910, Moo Kim Foong dies, presumably in childbirth and this second child Alex survives at least for a time. James Chee Quee then marries his deceased wife’s sister Moo Kim Kow in 1911; together they move to Thursday Island and have eleven children. Sometime around 1920 on Thursday Island, James takes a “third wife” named Jurng and they have six children. James Chee Quee dies in 1928 and his wife Moo Kim Kow takes over the store and by various accounts becomes a prominent businessperson in her own right. While some of their children had moved to the mainland – Cairns and Sydney – Moo Kim Kow and Jurng continue to raise their children on Thursday Island. Many of the family move to Queensland and New South Wales particularly following Moo Kim Kow’s death in 1939 in Sydney after medical treatment there.  Her body was returned to Thursday Island but then most of the remaining family including Jurng are evacuated to the mainland with the advent of World War II.

I have lived in the Northern Territory most of my life, although raised in Western Australia. Memberships include the NT Genealogical Society (Committee), Australian Museum and Gallery Association (NT Chapter Committee), and Chung Wah Society (NT Chinese Museum Coordinator).
View all posts by njsresearch6 →
This entry was posted in News and Views and General Research. Bookmark the permalink.

1 Response to Is this marriage legal?