November is almost over and the World War I Blog publication I have been working on – A Horse named ‘Kojonup’ … – is not yet complete. The following tale comes from my Muir-Buirchell Family Tree and is actually an extract from a wider project I am working on called There is a pub in my family: The Head and Solly Families in the South Australian Hotel Trade.

Growing up, all I knew of the Solly name was that my great grandmother Edith Margaret (married to Duncan Muir) was “a Solly raised as a Flavell”. Her mother – Ellen Head, married to John Solly, – died in 1882 aged 44 years when Edith was just 5 years old and she was evidently raised by the Flavell family: yet another research project.

Henry Solly was born near Canterbury in Kent, England, in 1800 and in 1827 marries Ann Colyer in Hackington, Kent. Henry and Ann and their eight children depart London aboard the Royal Admiral on 7 August 1840 arriving at Port Adelaide 13 December 1840. In 1846 Henry was the proprietor of 40 acres near Adelaide but by 1854 he was established in Leasingham, Clare Valley, as a farmer and public works contractor.

Thomas Solly was the youngest son of Henry and Ann and in 1842 was their first child to be born in South Australia. As a young man in 1866, he accompanied the South Australian Police Commissioner on an expedition around the north shore of Lake Eyre. The Police Commissioner was Major Peter Edgerton-Warburton formerly an Assistant Adjutant-General in the Indian Army and brother of George Edgerton-Warburton of Western Australia fame.

The available records indicate that Thomas joined the Mounted Police 11 July 1866 aged 24 years but his engagement seems to have been earlier. Thomas was described as “driver of own bullock dray and bush employment/stock keeper” on his Police enlistment papers. Perhaps Warburton already knew him and recruited him for his bushman skills.

Warburton departed Port Adelaide 11 June on the vessel Lubra for Port Augusta from where the expedition was to kick off. Warburton’s expedition was an official Government expedition, financed by the Police and he was accompanied by three Troopers. I have located a nine-page report prepared by Warburton but he only mentions one Trooper by name and that was one Farquhar.

Warburton had carried out three previous expeditions in South Australia including locating Fowlers Bay on the Great Australia Bight and mapping Lake Torrens. Explorers at this time were trying to find a route from Adelaide to Perth; a feat achieved in 1870 by Sir John Forrest. Warburton’s 1866 expedition was meant to explore the area known as “No Man’s Land” north-west of Mount Margaret near Lake Eyre and on this basis the expedition was strongly supported. However, having gone north of Lake Eyre he then went east apparently trying to discover the fate of the missing explorer Leichardt. He followed a river which he thought was the Barcoo or Cooper Creek to the Queensland border; this transpired to be a separate river that was subsequently named the Warburton River.

In his absence, an enquiry was launched into the efficiency of the Police Force and while it was not within the remit of the Parliamentary Committee, the Committee was critical of his exploration activities and recommended Warburton be dismissed. He returned to Adelaide in November of 1866 and whilst publicly defending his reputation, he refused to appear before the Committee on the grounds it was biased against him. Warburton was dismissed in February 1867 but the controversy continued to rage in Parliament and in the Press for the next two years. Warburton was completely exonerated in December 1867 and eventually in March 1869, the incumbent officer having also been dismissed, he was appointed Chief Staff Officer and Colonel of the Volunteer Military Force of South Australia.

Warburton undertook a further expedition in 1873 – he was the first to reach the Western Australian coast from Alice Springs but almost died in the attempt. Whether Warburton’s expeditions contributed any great deal to Australian exploration remains a source of debate.

The establishment of a Detective Force was one of issues that embroiled Warburton as was his management of a ‘Reward Fund’ that Warburton claimed was a Retirement Fund.

Following his marriage to Mary Milte in 1876, Thomas Solly transferred from the Mounted Police to the Foot Police and was a Detective in Adelaide for around two years before transferring back to the Mounted Police. In 1886 Thomas and Mary’s son was born and named Thomas Warburton Solly. The name Warburton is carried on into future generations and somewhere out there now I may have a third cousin named Thomas Warburton Solly.

In 1895, after nearly 30 years service, Thomas retires from the Police Force and on 1 January 1896 he obtains the licence to the Marrabel Arms Hotel. The Commissioner of Audit’s report for the 1895-96 financial-year reveals that Thomas Solly received a ‘compensation’ payment for retirement of £290 (approximately $37000 today).

The first records pertaining to a hotel at Marrabel seem to be 1864 when the Hamilton branch of the Manchester Unity Oddfellowship seeks dispensation to open a lodge at the house of Alexander Mitchell, Marrabel Hotel. For us non-South Australians, Marrabel is about 100 km north of Adelaide between Kapunda and Burra. 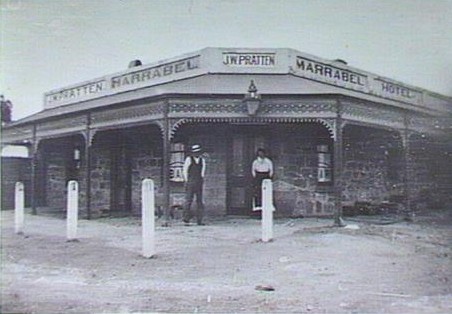 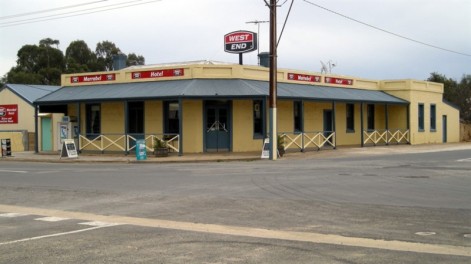 However Thomas did not enjoy his retirement for long – he dies 27 December 1896. The licence to the Marrabel Hotel transfers to his widow Mary (Milte) Solly and she continues as mine host of the Marrabel Arms through to the end of 1899 before taking on the Fountain Inn Hotel in Adelaide.

“The Late Mr. T. Solly. The friends of Mr. Thomas Solly will regret to learn of his death which occurred on December 27 at Marrabel. Mr. Solly was connected with the police force of the colony for almost 30 years, having joined Major Warburton’s exploring party in the northern areas in 1866, and on his arrival at Adelaide he was entered as a mounted constable. Early in the following year he was raised to the rank of a second-class officer, and in October, 1871, to that of first-class. In February, 1876, he was transferred to the foot constabulary where he remained until November, 1878, at which time he returned to the mounted force. In June, 1882, he was promoted to the position of lance-corporal and in July, 1888, to a corporal. He resigned his connection with the force after long and honorable service in June, 1895. Deceased will be missed by a large circle of friends.”

I have lived in the Northern Territory most of my life, although raised in Western Australia. Memberships include the NT Genealogical Society (Committee), Australian Museum and Gallery Association (NT Chapter Committee), and Chung Wah Society (NT Chinese Museum Coordinator).
View all posts by njsresearch6 →
This entry was posted in Muir - Buirchell. Bookmark the permalink.