This story about my convict ancestor, two times great grandfather Edward Treasure, was originally written as an assessment task in the Diploma of Family History course at the University of Tasmania.

Addressing the Quarter Sessions grand jury 28 March 1848 in Wells, Somerset, the Chairman, Mr W. Miles Esq. MP, stated there was no cause for congratulation on any diminution in crime given there were 144 persons charged with felonies and 8 with misdemeanours. Noting the felonies were not “marked by atrocity”, and the greater proportion of the charges were “stolen the necessities of life”, Miles hoped the cause was not “the poverty of the people”. The Chairman lectured the gathering on the importance of education, and found it appalling that so many, more than a third, of the charged persons were “perfectly uneducated.” 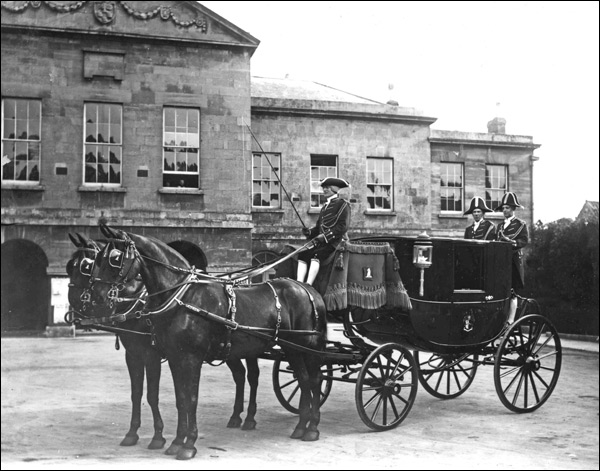 This day, Edward Treasure, age 23, my 2nd great grandfather, was sentenced to 10 years transportation for stealing ‘sweeds’ (turnips). Edward was not unfamiliar with the Somerset courts – tried twice in 1840 and sentenced to seven years transportation, the sentence was commutated to imprisonment in Millbank Prison. As in 1840,there were various petitions to mitigate his sentence, particularly by Mr MH Padfield acting for Edward’s family, but this time there was stiff opposition. Mr Charles Aaron Moody, at times the deputy and chair of the Somerset Quarter Sessions, Deputy Lieutenant of the County and the conservative Member for Somerset (West) in the House of Commons, wrote in no uncertain terms to the Home Secretary. Moody recalled from a previous case stating Stoke Lane to be a “den of thieves” and while he regarded Treasure’s offence “comparatively speaking trivial’, he could not “conceive … an old offender to whom punishment and mercy have already been in vain dealt out a further extension of mercy can either to himself or the public be beneficially granted”. Moody was aware of Edwards 1840 imprisonment stemming from a ‘curtilage breaking’ offence where, in company with John Treasure and Robert Emery, the Bell Inn Hotel in nearby Evercreech was burglarised.

Moody, perhaps, was justified for his views about Stoke Lane, Edward’s home village. A large number of Edward’s family were known to the Somerset courts: his sister Ann was tried and acquitted of larceny in 1828; sister Jane served two months for robbery with violence in 1838; sister Mary Ann was transported Van Diemen’s Land in 1839; brother John was transported to Van Diemen’s Land in 1841 along with their brother-in-law Robert Emery (husband of Jane); and, tragically, brother George, who was originally sentenced to death, died on the Hulk hospital ship Canada in 1834 although the death is recorded for the Convict Hulk Euryalus.

While Edward, now incarcerated in Convict Hulk Stirling Castle, was doing hard labour in Portsmouth Harbour, settlers in faraway Western Australia were agitating for a Penal Settlement in the Colony. Convicts, they believed, would help overcome the chronic labour shortage and deficiencies in public infrastructure. At a large public meeting in the Perth courthouse on 10 July 1850, the gathered settlers passed resolutions thanking Earl Grey for his prompt compliance with the petition for the establishment of Penal Settlement. Indeed, the Scindian had arrived in March with 75 convicts; by the end of 1852, a further seven ships would arrive bringing a total of 1468 prisoners.

Edward transferred from the Stirling Castle to the Minden which set sail 21 July 1851 arriving at Fremantle 85 days later with 301 convicts and 115 passengers, comprising 40 Enrolled Pensioner Guards and their families, aboard. Reporting to Earl Grey, Governor Fitzgerald, praising Surgeon-General John Gibson RN, advised there were only four deaths on the voyage – two children, one young sailor and one convict. Fitzgerald forwarded copies of addresses to Gibson signed by 269 convicts and on behalf of the Pensioner Guards. These addresses were published in the Perth newspapers.

The Minden convicts were granted Tickets of Leave on arrival and distributed to the various districts to seek employment with some retained for public works. It seems Edward was sent to the York district with £5/4/9convict earnings in his pocket working as a shepherd. Just nine years later, Edward was purchasing land near the Pallinup River in the Kojonup district, a location he had been taken to by Noongar people he met in York.

Edward employed convict bricklayer Samuel Smith to build his homestead house and outbuildings on Lot 48 Kojonup, around Martinup Springs, from 1860 onwards with the barn being finished in 1863. Edward’s descendants were to occupy this property almost continuously until 1984 and the homestead complex was placed on the State Register of Heritage Places in 2012. Edward married Anna Maria Norrish, 17 years his junior and daughter of one of the districts earliest settlers, Richard Norrish, in 1863. Edward continued to increase his landholdings and Martinup became the social centre of the district. Expanding his business interests to Albany and Kojonup, Edward was described in 1880 as “one of our most enterprising sheep farmers”.

His eldest son, John James was sent to Adelaide to complete his education at Christian Brothers College. Illiterate in 1840, imperfectly literate in 1848, Edward in 1871 participated in a meeting supporting the Catholic Education Committee and in 1884, was elected to the Kojonup District Education Board.

Edward purchased a large property in 1883, including the ‘Semblance of Olde England Hotel’, in Kojonup town. He died there 27 January 1886; the official cause of death was ‘excessive drinking’. There are signs that Edward was troubled by alcohol consumption throughout his life: he was in a drunken stupor when robbed of a gold watch in 1863; he was ‘tipsy’ when negotiating a failed business transaction in 1884, and the family contested his will in 1886 where it was alleged Edward had “contracted drunken habits … was not of sound memory and disposing mind.”

Notwithstanding debts against his estate, his family and Martinup continued to prosper. Despite his ignominious end, Edward Treasure, a former petty criminal from Somerset, indeed became a ‘farmer and grazier’, and a West Australian pioneer.

Battye J.S. (ed.), The Cyclopedia of Western Australia: An Historical and Commercial Review, An Epitome of Progress, The Cyclopedia Company, Perth, 1912, in two volumes.

Bignell, Merle, First the Spring: A history of the Shire of Kojonup, Nedlands, University of Western Australia Press, 1971.

Perth Gazette and Independent Journal of Politics and News.

I have lived in the Northern Territory most of my life, although raised in Western Australia. Memberships include the NT Genealogical Society (Committee), Australian Museum and Gallery Association (NT Chapter Committee), and Chung Wah Society (NT Chinese Museum Coordinator).
View all posts by njsresearch6 →
This entry was posted in Jones-Sexton. Bookmark the permalink.